“There is no death, only a change of worlds…”
– Chief Seattle

Today we celebrate the life of SDSU Alumni Larry Banegas, MSW, who touched the lives of many with his caring and benevolent heart. In 2013 the SDSU College of Health & Human Services honored Mr. Banegas as the CHHS Monty Award recipient, the highest award for an alumni graduate. About this he said, “The honor is important, but it’s more important that my family is there and that they are proud of me. I want to remind people that they don’t have to accept the world as it is, you can change things. It’s important to give back – if you do well it’s important that you inspire and help others.” Larry dedicated his life to giving back. An accomplished musician, Larry also played guitar and accordion with a local band called Juan Bravo and his sons Brandon and Ethan. His love of music was only surpassed by his dedication to children, human rights and social justice. 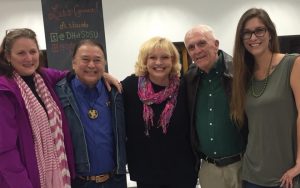 Tamara Strohauer, Lecturer and SERVE Coordinator met Larry two years ago at the California Indian Conference. “We spoke for hours about our lives and our visions for healing ourselves, our families, and our Native communities. He became a deeply trusted friend and mentor. Larry Banegas was a person who heard every word you spoke, as well as those that you did not yet know how to articulate. He was a person who saw you, saw into you, saw all that you felt inside and all that you could be if you allowed yourself to speak your truth. He saw the pain inside you and he saw the beauty within it. Larry was a man who listened, shared his heart, opened up and gently guided people to make sense of difficult experiences.”

Making sense of difficulty was Larry’s life’s work as a social worker, advocate, educator and healer, because Larry spent a lifetime making sense of his own trauma and that of his People. His son Ethan Banegas asked that we tell his father’s story here, the story of why he chose to become a social worker, and dedicate his life to helping and protecting children. Larry was largely raised by his grandmother on the Barona Reservation, but as a young boy, while living in Linda Vista with his parents and siblings, his baby sister died in her crib. The unresolved devastation over this loss led to their parents’ divorce and severe alcoholism. “His mother would have men over, and one beat and abused my dad, something he never truly got over, it was so brutal.” Ethan further shared that his father, aunt and uncle were considered the “orphans” of Barona Reservation, often roaming the reservation hungry and alone. “It was hard for my dad to be a father, he was never shown how and we wanted a perfect Dad.” Ethan expresses understanding of his father’s path, “My dad was a healer, his life growing up was pretty hard, and he figured out a way to help himself, and then to reach back and help others.” Larry, as well as his sons, understand that what happened to him is attributable to historical trauma, that everything happening around him was the result of genocide not only of people, but of culture, the result of his people’s removal from sacred land and sacred ways. Larry often spoke of the poverty and alcoholism that were all too common on the reservation. He said, “I didn’t accept it. I wanted to do something.” He went on to earn a Bachelor’s degree in Communication from CSU-Long Beach in 1974 and an MSW degree from SDSU School of Social Work in 1987. 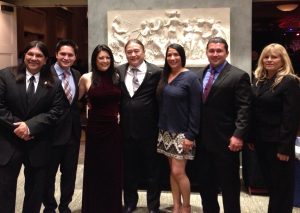 As a social worker, Larry was committed to Indian Child Welfare and worked with the County of San Diego in a variety of positions including foster care, adoptions and child protective services. Having survived his own childhood abuse, he was determined to help children and families. He also worked as a mental health counselor in Jamul with Native American students providing early intervention and drop-out prevention services. An inspiration and role model, he helped many students with school retention and college attendance. He retired from daily employment several years ago to pursue his passion for helping Native American youth.

Over the course of his life, Larry worked with the American Indian Movement (AIM), including participating in the Occupation of Alcatraz (1969-71), when he led CSULB students to San Francisco, to bring national awareness of the conditions of the Native American people. He later taught Native American history at CSULB and California State University Fullerton. At CSULB he started the school’s first Native American Studies concentration. He wanted all Native American youth to know that “you can do this”, meaning go to college and pursue a career of choice.  According to Larry, “Education is key to the future but it’s hard to do alone. Students need to be able to accept help from faculty and family alike.” He spoke openly of his own challenges of leaving the reservation for college and was dedicated to making sure every Native Youth has the opportunity to find their way.

Larry remained connected with SDSU through multiple disciplines including the School of Social Work (SSW), American Indian Studies (AIS) and Counseling and School Psychology Departments. He joined us in January of 2018, when Tamara Strohauer, along with SDSU SSW and AIS Departments, hosted the Tribal STAR Seventh Generation Work Group. During this event, Larry spoke to Tribal and County Child Welfare workers and faculty of his time in child welfare, his work with ICWA (Indian Child Welfare Act), and shared his vision for healing people and our communities. Larry further worked with Dr. Carol Robinson-Zanartu and graduate students in the Native Scholars Project, providing spiritual ceremonies including sweat lodges at his healing center. He was continually active and collaborating with the AIS Department, and suggested the name “Elymash Yuuchaap” meaning “You Think” for our Indigenous Scholars and Leaders Program. He spoke at SDSU last spring in our new Digital Humanities Center, sharing his experiences at Alcatraz and inspiring the next generation of Native activists, advocates and allies. 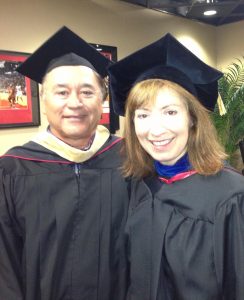 Beyond SDSU, Larry was instrumental in the growth of Kumeyaay Community College (KCC), located on the Sycuan Reservation, and taught Kumeyaay Humanities there for several years. His son Ethan is also an instructor there teaching Kumeyaay History, and will continue his father’s legacy. KCC is considered a satellite college of Cuyamaca Community College and is largely funded by the Sycuan Band of the Kumeyaay Nation. Other funding is sought from tribes throughout the SD County and several including Barona, Viejas, Santa Ysabel, Pala, Mesa Grande, and Jamul have all contributed to KCC. Larry was also the first Native American to serve on the Board of the San Diego Museum of Man, which houses exhibits and recognition of the Kumeyaay Nation as First Peoples of this land, along with a new extension of the exhibit Kumeyaay: Native Californians dedicated to ancient Kumeyaay astronomy.

Among Larry’s many accomplishments is the creation of a website (www.kumeyaay.com) which details the history and culture of the Kumeyaay Nation. The website includes news stories, videos and music as a source of information and inspiration, and will be continued by his sons. Larry developed the Kuseayaay (Medicine Person) Spiritual and Wellness Center at Barona, utilizing holistic and spiritual practices, along with natural medicines, to help people suffering with ailments from Lyme disease to cancer. This was a great focus of Larry’s and he had hopes of expanding with a larger healing center to bring back Indigenous health practices. He was active with Earth Day and all of our Indigenous communities as well as working and traveling with Intertribal Youth, bringing cultural and spiritual practices to our Indigenous youth across San Diego.

Larry had a longstanding vision of creating a documentary. His son Ethan is working diligently to bring this dream to fruition focusing on a smaller project of data collection through filmed and recorded interviews with Kumeyaay Elders in San Diego County and Baja as well as Luiseno Elders in North County, San Diego. Funding is difficult, and Ethan is working with Federal grants, the San Diego River Conservancy, and the People of Barona. In conjunction with the San Diego History Center, The Barona Museum, and Tribe, the project is slated to be complete by 2020. In 2019, the San Diego History Center is going to make an exhibit on Kumeyaay oral histories called “Welcome to the Mix.”

Larry Banegas began multiple legacies which will continue to grow and inspire for generations to come! His words of wisdom and kindness will live on in all of our hearts forever as will his innate ability to help people take care of themselves. SDSU Professor Dr. Donna Daly, who worked with Larry for years in Child Welfare, shared her last conversation with him, “Larry asked me, ‘What will you do for Donna when you retire?’ I kept talking about my son and my friends and he kept bringing it back to me — he finally said, “you must take care of yourself — you worked hard all of these years and now it’s time to turn inward and be good to yourself…’  Very profound and very true.” 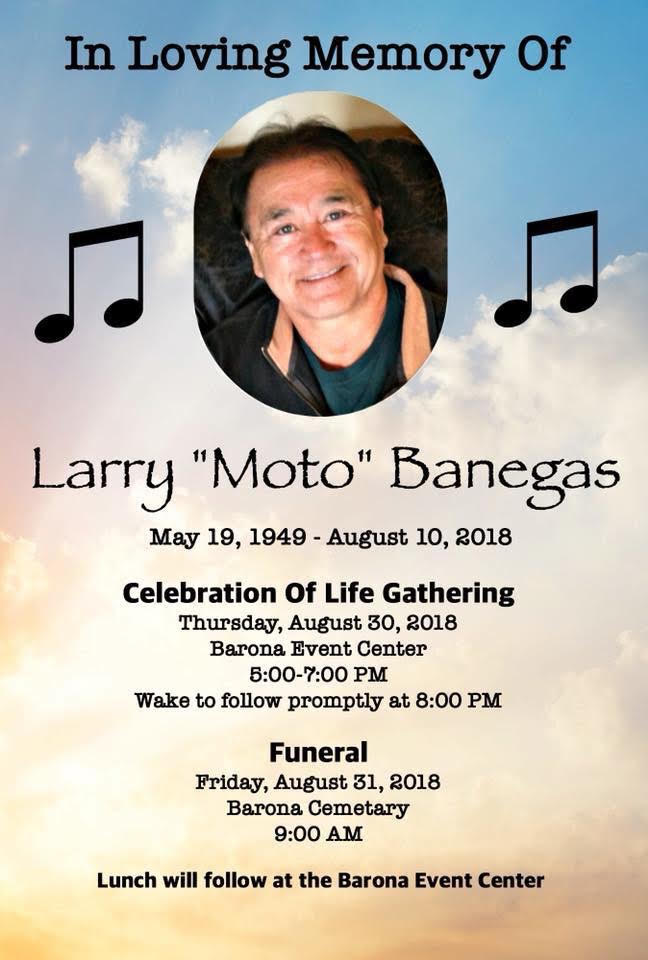 Larry Banegas is survived by his sons, Brandon, Ethan and Zackary Banegas, all of Barona; his longtime partner, Denise Mahaffey; his brother, Bobby Banegas of Barona; his sisters, Beverly Means of Barona, Velma Schlater, Diane Bojorquez and Doris Magante of the La Jolla Indian Reservation, Linda Sanchez of Reno, and Gwendolyn Sevella of La Posta Reservation; and nine grandchildren. A “Celebration of Life” will occur August 30, 2108 followed by his wake and funeral at 9:00 am August 31, 2018. Larry will further be honored at the “Calling upon the Warrior Spirit to Heal Historical Trauma” Conference and Ceremony to be held at Viejas Resort in October of 2018. Our deepest condolences go out to the Banegas family, the People of Barona and Kumeyaay Nation, and all who loved this incredible man!